Subject: Re: iPod Award Date: Mon, 25 Dec 2006 12:32:13 -0800 (PST) From: John Liu
Dr. Li:
I am proud to announce that I not only received an 800 in math, but in the other two sections as well. I can fax you the collegeboard printout score sheet if you want. The official score report will not be in for another few weeks.
As for the reward, can I get the Nintendo DS instead of the Ipod?
John Liu

My Path to Score 2400 Perhaps not the Shortest, But the Surest - A Pleasant and Fruitful Experience
by John Liu (Dec, 2006)

We have moved beyond a world built upon brute strength and physical skill to a world centered on mental acuity and the production of ideas. In this world, we are judged by our test scores and our grades. Although these cannot truly represent who we are, they are what society sees. Invented in the 1920s, the SAT is the principle exam used by colleges to screen and judge the aptitude of students, and although it is not almighty, its results carry tremendous weight.

My personal experience with the SAT began in eighth grade, when my parents bought me a set of SAT computer practice disks. These disks exposed me to the harsh, unforgiving world of college entrance exams. In all actuality, the exam did not seem very harsh to me then, as it did later. I, after all, had three long years before I would have to face it. And so, I sporadically worked on improving my without hurry or care.

In the fall of 2005, I experienced the actual exam as I took the PSAT and received a 196. A full year later, I took it again and received a 208. It was quite clear that although my skills were improving, they were not improving fast enough. I had less then two years left and a 2080 simply was not acceptable.

A little worried, my parents sent me to Dr. Li’s summer camp in Maryland. I had gone the previous summer as well, but I had not learned much. The second time, something changed. The weeks that I spent there were some of the most productive of my life as my skills in mathematics and language mechanics soared to new heights.

I returned home, not yet confident but somewhat hopeful. However, my self-esteem immediately dropped when I started to take practice exams. I never scored very poorly, but my scores seemed to plateau at less than 2300. Try as I would, I never scored above that number on any practice exam. I signed up for the December SATs and as that day drew nearer and nearer, I grew more and more frustrated.

The results of the two tests returned nearly simultaneously. The PSAT results were the first to come. My score had jumped 23 points in a single year to 231. I then waited anxiously for my SAT score. It arrived a week before Christmas, just when we were about to leave for vacation. To my utter astonishment, I received a perfect 2400.

Many have asked how I got this score. My best answer is hard work. The SAT tests diligence, not intelligence. Dr. Li’s camp and my test preparation books provided the tools, and I provided the effort. There is no secret behind good results. With the proper tools and an honest effort, success is only a few months away. 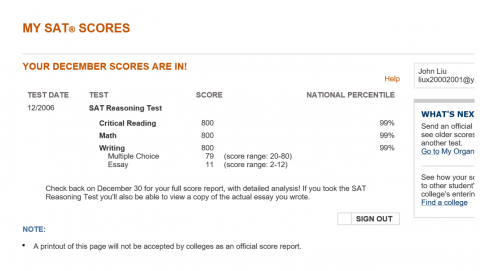 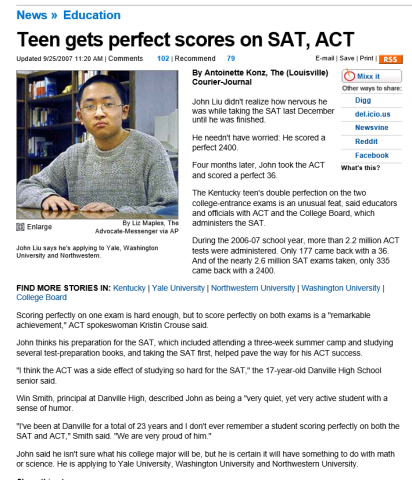 Keep up to date with new programs and discounts!